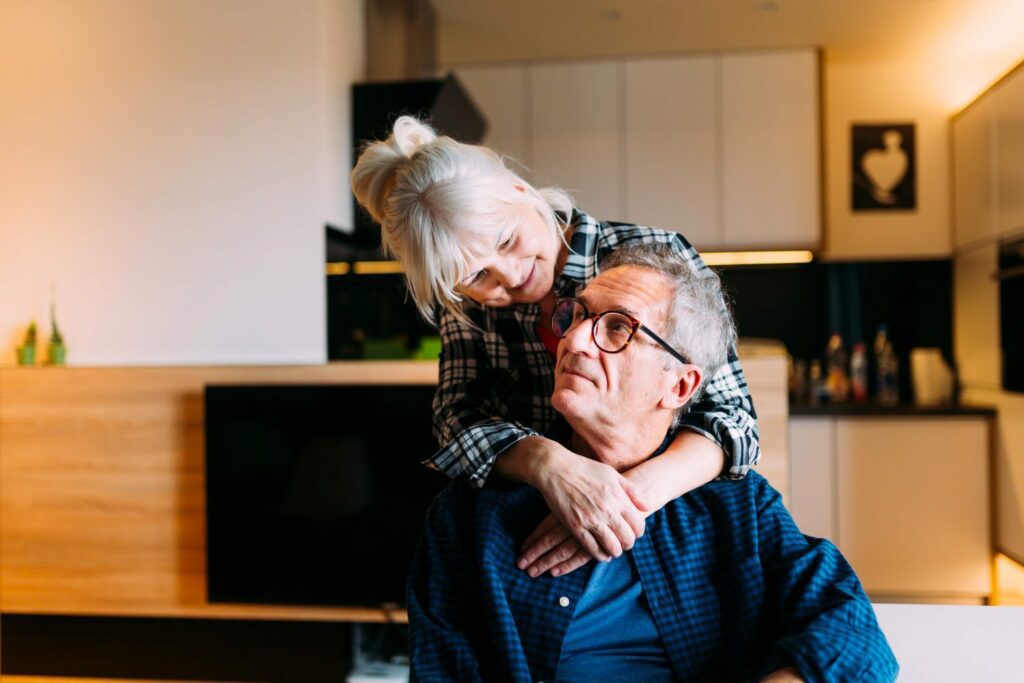 Two years ago, Allison Pearson and her husband Scott were looking forward to their retirement dreams: traveling, volunteering, learning new skills, spending time with family and friends, and more. Unfortunately, their dreams have changed. That’s because Scott was diagnosed with early-onset frontotemporal dementia.

Since his 2018 diagnosis, he’s gone from running his own business to being unable to work. He has trouble following conversations, forgets what day it is and can no longer drive. “Every now and again he’s still the man I married, but most of the time he’s like a happy four-year-old boy,” says Pearson. Before long, he will need full-time care.

“I’ll be honest,” says Pearson. “A lot of things now are impossibly hard, and I spend many sleepless nights worrying about what lies ahead. But I’m not sharing this to complain. I’m sharing because I’ve learned a lot of valuable lessons along the way, lessons I believe can help others face unexpected challenges that occur as we near and enter into retirement.”

Pearson isn’t alone in dealing with the challenges of caring for a loved one. According to AARP, more than 40 million Americans are already serving as unpaid caregivers.[1] And with the U.S. 65+ population set to nearly double over the next generation, caregiving will become an even more pressing issue for even more people.[2] For many, caregiving, as it did for the Pearsons, will require big adjustments and may even derail their retirement dreams.

Flash back three years. The Pearsons had just agreed to move from Denver to Nashville for Allison’s job when they received Scott’s diagnosis.

As you’d expect, they were devastated, but Allison wasn’t completely surprised. “Over the past several years, I’d seen signs that something was amiss,” says Pearson. “At first, I didn’t take them seriously, but then our adult kids began noticing that their dad didn’t seem ‘quite right.’”

Scott’s diagnosis sent Pearson into panic mode for several weeks, then she pulled herself together to learn everything she could about Scott’s disease and its likely progression. “I was lucky to find a frontotemporal dementia support group, something I desperately needed, and now attend monthly meetings,” says Pearson. “I also started house hunting in Nashville. Scott and I had already discussed downsizing before his diagnosis so settling on a smaller house was easy.”

But not much else was.

“I worried 24/7 about a long list of things,” says Pearson. “What impact would Scott’s diagnosis have on our family? How long could Scott be left alone at home while I was at work? Could I work full time and still have the energy to care for Scott? What will happen when Scott needs full-time care? Who will provide it? How will I pay for it? Will I ever be able to retire?”

While Pearson says she can’t yet answer these questions, here are five valuable lessons she’s learned that may be of help to you and those you love as you prepare for the decades ahead:

Lesson No. 1: Get your financial and legal affairs in order … NOW.
Like most people, the Pearsons thought they’d both be healthy for a long time. As a result, they put off several important decisions, including the decision to buy long-term care insurance. “We can’t change that,” says Pearson. “But if you’ve put off purchasing insurance or making other important financial decisions, now’s the time to start.”

Lesson No. 2: Seek professional advice.
The Pearsons had already assigned power of attorney (POA) to one another when they lived in Denver, but after meeting with an eldercare lawyer in Nashville, they learned that their Colorado POAs weren’t recognized in Tennessee. “We needed new ones ASAP, while Scott was still of sound mind,” says Pearson. Doing that, plus transferring everything into Allison’s name so that she can make decisions without Scott’s approval, cost nearly $10,000], money she feels was well spent in protecting her, Scott and their children, as well as the Pearsons assets.

Lesson No. 3: Say yes to what you can … while you can.
Three years ago, the Pearsons—to celebrate their 25th wedding anniversary—traveled to Germany with their extended family. “Although the trip was difficult, I’m so thankful we did it then as Scott can no longer travel,” says Pearson. It’s now also difficult for Allison to travel on her own; when she does she must pay $200 a day for respite care for Scott because he can no longer be left alone.

Does Allison wish Scott would have gotten long-term care insurance when they were first married? Yes, but there’s nothing she can do about that now, so rather than dwell on the past, she’s living in the present and focusing on the future. “It’s not the life we once envisioned, but I intend to remain strong for Scott and create the best possible future for the two of us, while also making sure I take care of myself,” says Pearson.

Lesson No. 5: Reach out for help. It takes a village to raise a child. It also takes a village to care for a loved one with dementia, so don’t go it alone, advises Pearson. Instead, ask family, friends and coworkers for help. Join a support group. Enroll in an online caregiving course. Also take advantage of free resources, including AARP Family Caregiving and the Alzheimer’s Association. Equally important, invite your family and friends in. “Doing so helps them better understand what you’re going through and gives them valuable insights into how best they can support you,” says Pearson.

As the Pearsons have learned, the days leading up to retirement don’t always turn out the way you expect. By thinking ahead and taking action now, you can make important course corrections if you need to.

Bev Bachel is a Twin Cities freelance writer whose first job out of high school was working in a nursing home where she cared for patients with dementia.